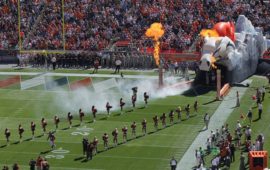 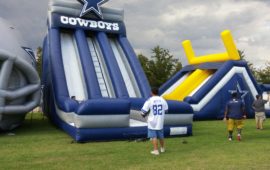 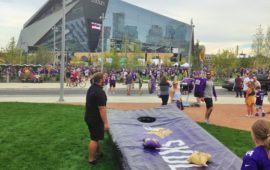 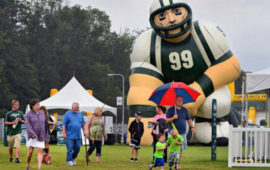 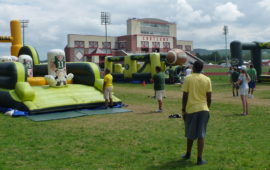 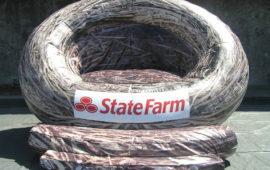 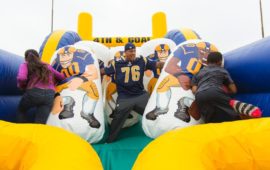 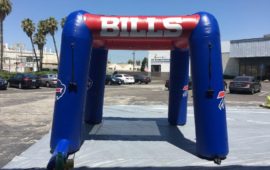 Get ready for America’s game with custom football inflatables from Inflatable Design Group! Baseball may be America’s pastime but football’s status is on another level. Football has a special place in Americans’ hearts. It is a sport that brings the masses together and unites a community for a couple hours every weekend. Football teams play far fewer games than most other sports, which makes every home game more special. Give your fans the opportunity to create memories they won’t be able to make anywhere else with custom football inflatables. The tailgating experience plays a vital role in this as no other sport in the country has a pregame ritual quite like football tailgating.

Make your fans’ tailgating experience unforgettable when they take part in custom inflatable football games. Custom inflatable football games get the fans up and active while competing against one another to win bragging rights. Crash over the goal line in 4th and Goal, show your explosion in the bungee run, display your accuracy in football toss, bring the leg power with the inflatable field goal competition, or lay out for a catch in down and out. After all the fun, it would be time to cool down in a custom inflatable misting station. Make sure you don’t leave the fan zone without snapping a picture next to your team’s own inflatable mascot! Get your team’s sponsors involved with custom vendor tents and table covers so they can engage your fans while supporting your team. All of our custom football inflatables are easy to set up, easy to take down, so you can focus on running the best fan zone and tailgate in the nation.

We are in a period in sports where fans are more likely to stay at home and watch a game than get up and head to the stadium. The production value of NFL and college football games has increased substantially over television that teams have to come up with new and unique ways to draw fans in. Give your team that extra edge against your opponents with custom football inflatables. Visiting fans will envy what your loyal supporters get to enjoy every week. Create opportunities for your fans to share their game day experiences with their friends and family on social media. Spark a new buzz for your team that was not there before. With over 25 years of experience working with NFL and NCAA football teams, Inflatable Design Group is the most trusted name to deliver high-quality custom football inflatables for your team!